Returning to Yoga after a Back Injury

Posted on April 6, 2015 by Nayaswami Gyandev

This past year, I returned to teaching yoga after a nearly two-year hiatus while I recuperated from a painful back injury: a bulging disk at L5-S1, which was further complicated by a very inflamed sacroiliac joint. How did the injury happen? In brief, because I did not listen to my body when it was telling me the low back was stressed out. You would think a yoga instructor would know better, but obviously I still had some lessons to learn!

The injury was excruciatingly painful. No position approached anything close to comfort. Any forward flexion at all brought me to tears, but standing and lying down weren’t much better. Asanas were out of the question, as was meditation. This was a big blow as they have been a daily part of my life for a long time, and I rely on them for physical and spiritual wellbeing.

My physical therapist helped me understand the physiology of a posterior bulging disk, and guided me to the one position my body could endure: a pillow-supported Cobra Pose. I spent hours and weeks in that position, anytime I possibly could, and slowly the disk began to move back into place. However, it would be many months before my pain level was low enough to sit in meditation, or do asanas.

So what was a yogi to do? During the first year, I spent a lot of time lying on the floor, moving very gently (when I wasn’t in Cobra Pose). Holding still was more painful than moving, so I kept moving, as carefully and mindfully as possible. Since meditation was not a possibility, I began a very active prayer life. I’ve always loved to pray, but now I began to get very intentional about it. I made sure to pray a lot for others in order to not become overly self-focused (a definite danger when one deals with chronic pain and limitation). Sometimes I could do some of the Energization Exercises of Paramhansa Yogananda (like the arms), but sometimes it hurt too much to stand up and do them. I did, however, incorporate aspects of them into my rolling-on-the-floor routines.

One very powerful moment stands out in memory from this time period. The pain was particularly intense that day, and I was hollering to God for help. I remembered Yogananda saying that God likes us to argue with him, and I was arguing! I was feeling rather victimized at the time (“What did I do to deserve this?!”) when suddenly something in me shifted. In a very loud, firm voice I said (ok, I yelled), “I DON’T CARE WHAT AFFLICTION VISITS ME! I WILL NOT ALLOW IT TO MAKE ME FEEL SEPARATE FROM YOU!” The pain eased up from that moment on, although it would still be many months before it disappeared entirely. From that moment, I began very actively to affirm my oneness with God through, or in spite of, the pain.

After about a year, I was able to sit for a while. I could usually stand and walk without too much pain. I felt ready to return to an asana practice. Oh my poor, stiff, weak body! Poses that previously had been easy and yummy were now uncomfortable or impossible. I went from being able to do a deep, full forward bend, to having to keep a flat back at all costs. My hips screamed at just about everything. Poses that require forward flexion to enter (like Shoulderstand or Headstand) were off the list. The innervation to my legs was still affected, so I fell over in balance poses.

I adopted Patanjali’s sutra, “Asana should be steady and comfortable” as my guide. I joked about how I was doing “tiny yoga.” In Ardha Chandrasana (Half-Moon Pose), my lean to the side was about ½ inch off center! I used straps and blankets and pillows and walls to support my body. It was very frustrating for a long time, but I persevered. I now had to apply to myself all those adages I had said hundreds of times to my students: Go only to the point of first resistance. Deeper isn’t better. Honor your body and its history. Present time is the only place you can do yoga. Don’t compare the body of today with the body you once had. Breathe, breathe, breathe!

I am a much better yoga instructor for having been through this experience. I am more present, and my attention to proper alignment is meticulous. I have deeper compassion for people with physical limitations. There are still poses that I cannot do deeply, and I often use students for demos (something I never used to do; it was, ahem, a point of pride …). I tell my students that I am a walking advertisement for the fact that yoga is for everyone, not just the young and flexible. Interestingly, although my body is more limited, my classes are fuller than ever—proof that people come to yoga for more than a physical workout!

I feel now that God and Guru wanted me to have this experience to learn so many things: humility, patience, mindfulness, compassion, subtlety. I am an acupuncturist who deals daily with other people’s pain, and I now have personal knowledge of the psychological and physical challenges of chronic pain. As a devotee, the plethora of techniques given to us by Yogananda was what got me through each day, and brought me out the other side. 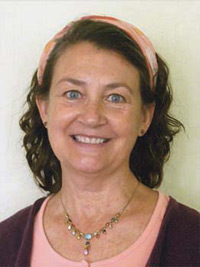 Lynn Lloyd. Lynn Lloyd graduated from Ananda Yoga Teacher Training in February 2000. In addition to teaching Ananda Yoga and Ananda Meditation, she is a bodyworker and licensed acupuncturist, and she holds an advanced degree in Traditional Chinese Medicine. She lives, practices, and teaches in Mount Shasta, California.