Posted on December 3, 2014 by Nayaswami Jyotish 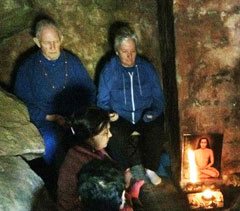 We recently went on a pilgrimage to Babaji’s cave. There were forty-five pilgrims on the trip, with most of us seeing this sacred spot for the first time. It was here, in this little secluded cave in the middle of nowhere and of everywhere, that our lineage took birth. From this tiny cave, the science of Kriya Yoga has spread around the globe. It was here that Lahiri Mahasaya received not only Kriya initiation, but also the charge to take it back to the masses of spiritually thirsty souls. Autobiography of a Yogi relates that Babaji told him, “A deep purpose underlay the fact that you did not meet me this time until you were already a married man, with modest business responsibilities. You must put aside your thoughts of joining our secret band in the Himalayas; your life lies in the crowded marts, serving as an example of the ideal yogi-householder.”

This was my first chance to spend time in the Himalayas, though they have long visited my dreams, my meditations, and my paintings. The area around Ranikhet and Drongiri Mountain was the scene of many of the stories from the Mahabharata especially about the Pandava brothers, and there is a spiritual magic to this area. It was here that these great spiritual warriors spent their hidden exile for thirteen years, and later lived for many years before passing from this world. It is little wonder that Babaji/Krishna would choose to live here also hidden from worldly eyes. I feel that somehow, in past lives, I was connected to both this lineage and this area.

Aside from the history and holy vibrations of this area, one also feels that the mountains themselves are alive and conscious. There is a palpable blessing that calms and relaxes the mind as one gazes on them. Day by day, as we stayed here, concerns fell away, deep peace and happiness seeped into our bones, and our meditations soared. As Swamiji’s song, “Channels,” goes, “Mountains, remote and still, hint at higher worlds unseen. So may our lives be: soaring and serene.”

There are special environments, long inhabited by saints of many paths, which are helpful for yogis. The desert is holy because it is cleansed of worldly vibrations. The ocean is spiritually uplifting because of its vastness, and it is a good practice to look at the horizon line where the ocean meets the sky. This helps awaken superconsciousness.

But no environment is so sought out by great masters as the mountains, especially the Himalayas. One of Yogananda’s first deep spiritual experiences was of seeing faces of Himalayan yogis during meditation and then seeing them dissolve into the pure light of God. Master’s Swami Order lineage was the Giri, or mountain, branch, and Swami Kriyananda’s homes were usually in mountainous areas where vast vistas helped expand the consciousness. The hills are where his body will continue to reside, in the Moksha Mandir at Crystal Hermitage in the foothills of the Sierra Nevada Mountains in California.

I know that this is not the last time the Himalayas will see me slowly treading my way toward them, nor, I expect, my last visit to Babaji’s cave. It is a magnet that has captured my heart.

This entry was posted in Spiritual Travel. Bookmark the permalink. 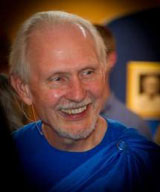 Nayaswami Jyotish. Jyotish and Devi Novak, both ministers, are the Spiritual Directors of Ananda Worldwide.