Posted on September 26, 2014 by Nayaswami Nefretete

It seems that we may have a friend in common – Thomas Tamas. He seems to make his acquaintance often and readily makes friends. Mr. Tamas is the source of numerous missed opportunities and difficulties. You may recognize him by a feeling of heaviness or sluggishness or as feelings of listlessness and fatigue.

His presence is so engaging that there is nothing you will want to do when he is around. He will politely invite you to sit down and rest—to ‘take a load off’ because after all you have been working exceedingly hard and have had quite the long hard day. Mr. Tamas will be quick to point out a distant nagging headache or a pain somewhere that you have been ignoring. He will say that he surely knows and understands all of the difficulties you are justified in feeling so burdened with. He will further recommend that these can all be easily taken care of by couch-potato sitting, Netflix, or other ‘quality’ time in front of the computer.

Fortunately, we have a way to be done with Mr. Tamas.  We do not have to give in to his masterful persuasions.  We certainly should not sit down and entertain him. You have to get physical with Mr. Tamas. You will have to ignore his protests as you shift gears, grab him by the arm, and show him to the door.  Yogananda has given us a ready antidote to the lethargy, weariness, and fatigue that Thomas Tamas is so eager to dispense. In fact, you should do Yogananda’s Energization Exercises especially for Mr. Tamas as soon as he shows his face.  You will see that he will be totally horrified and miraculously leave of his own accord. You may be surprised at how very quickly these exercises dispatch Mr. Tamas.

We can also run Tamas away with a quick walk or by using mantras and affirmations.  Your mood and disposition will lighten and lift.  You will feel totally refreshed and recharged. You will also be prepared and on guard with your arsenal of energization tools to remove Thomas Tamas the next time he darkens your doorway and tries to ingratiate himself. 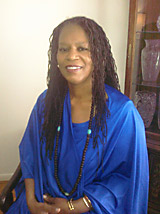