Posted on February 25, 2020 by Nayaswami Diksha

Paramhansa Yogananda, brought to the West the path of Kriya Yoga and many spiritual exercises to help people attune to the consciousness of God. I experimented with one of his powerful exercises, and I’d like to share my experience with you.

In the book, How to Awaken Your True Potential, Paramhansa Yogananda offers this exercise. Practice the following exercise in the morning as soon as you awake, during the lunch hour, and also before going to bed:

Repeat the above exercise 12 – 24 times. Then, offer a deep heart’s prayer to God until you feel the contact of God through ever-increasing peace.

In January 2019 my husband, Gyandev, and I flew to India to lead a retreat in Kerala, India.

At the San Francisco airport, as we were waiting for our late-night departure, I felt a bit anxious about the long flight. I had brought with me a kit of remedies to help support me along the journey.

I decided to remain in silence and focus on repeating the mantra, Om-Spirit-Bliss…

As I prayed to my guru, Paramhansa Yogananda, I was inspired to do an experiment. Instead of spending the long hours of the flight watching movies, reading, and chatting, I decided to remain in silence and focus on repeating the mantra, Om-Spirit-Bliss, as he instructed. I had practiced this in the past for short periods of time, but now I had an opportunity to practice as long as I wanted, without distractions, as there was nothing to do and nowhere to go until we arrived in Hong Kong (14 hours).

After two hours of getting settled and eating dinner, I covered my eyes with an eye mask, my ears with noise-canceling headphones, and I was ready to begin. 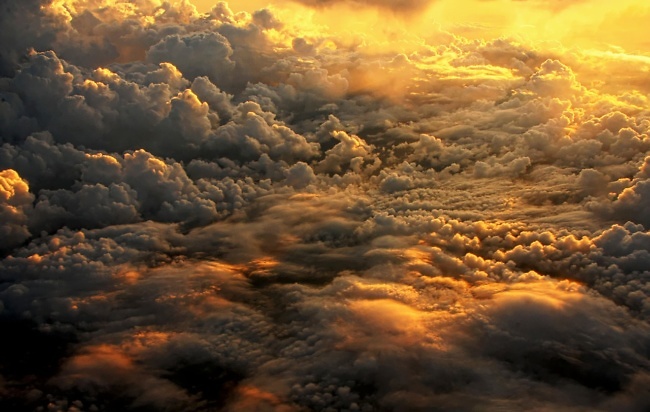 For the next 12 hours, until we arrived in Hong Kong, I practiced this mantra most of the time with some pauses during which I meditated and practiced Kriya techniques. As the hours went by, I found myself feeling better and better, energized and uplifted. Of course, I was unable to lie down as he suggested, so I reclined in the economy chair as far as possible.

For the first few hours, I practiced repeating Om-Spirit-Bliss after the exhalation of the breath, as instructed, but gradually I found myself repeating it only mentally. I began noticing the effects after 2 – 3 hours. My body was calm and the sense of time was no longer present. I entered a new zone of continuous calmness which gradually was filled with joy. The more I practiced, the more I wanted to practice.

I began to feel as if I was surrounded by an invisible bubble of protection. Despite the many hours of sitting in the economy class chair, crowded into a very small area, I felt space, comfort, and joy. All anxiety vanished and I didn’t use any of the remedies I brought with me. The power of this mantra Om-Spirit-Bliss, infused with devotion, sustained and kept me well.

After a short stop in Hong Kong came a four-hour flight to Singapore, during which I was able to sleep deeply. During the layover in Singapore (eight hours), I continued the practice while walking in the airport, sitting, and waiting for the next flight to India.

We arrived safely in India. During the five-week stay in India, I experienced major karmic challenges. You can read the story here: 25 Days Off the Ground. Despite the challenges in India, I felt the divine hand with me always, protecting me, keeping me strong, and helping me make the right decisions.

The initial long practice on the plane created a good foundation. As I continued to practice the technique once in a while, I experienced the effects. I felt the power of the guru awakened inside of me and his presence guiding, sustaining, and healing me.

I experienced the shift from ego to soul. I felt the power of the soul becoming stronger than the ego. I started to be guided by the grace of my guru. It is said that the guru empowers the soul. The soul began to lead the way, not the ego. The divine force inside of me was activated.

As I experienced and observed being led by a divine force, I felt humbled and filled with deep gratitude. The guru lives inside each person. By the power of love, devotion, prayer, meditation and self-offering, the guru’s power is activated and begins to lead the way.

Later as I reflected on this experience, I remembered that AUM is the highest mantra, attuned to the very essence of all vibrations, the Cosmic Vibration itself. By repeating this mantra, I was able to shift from the egoic identity of body and personality to the soul, which is always blissful.

When one withdraws from the senses and desires, the heart becomes calm and the mind silent.

As I withdrew from the five senses and outer stimulations and went within, offering my human self to God, the shift in consciousness was able to happen — from external reality to identity with the divine presence within.

When one withdraws from the senses and desires, the heart becomes calm and the mind silent. One’s consciousness is able to shift its identity from ego to soul.

In his book, The Art and Science of Raja Yoga, Swami Kriyananda helps us understand:

Mental affirmation of some kind is necessary as a means of awakening one’s own inner powers. Even at their best, however, those powers are exceedingly limited so long as they are not attuned to the consciousness of infinity. People who think to advance by the strength of their own little egos have simply no conception of their distance from divine perfection, the journey to which has almost for its starting point the relinquishment of the ego.

And yet, to expect God to do everything for us is to misunderstand the law also. In the last analysis, what we must learn is, not that we are nothing, but that God is everything, including our own selves. This we can learn, not by passively leaving all efforts to Him, but by doing our own best, while at the same time lovingly inviting His assistance in our efforts.

By the intensity of our own concentration and devotion, God’s grace is enlisted to make our prayers effective.

If you will utter any chant or mantra with a deep inner consciousness of its purpose, and from the fullness of your own being, the words will be effective even if your outward pronunciation of them is not exact. (Raja Yoga, Step 8, Affirmations, Part 2: Meditation)

We create a positive vortex of energy that uplifts the mind to a higher level of consciousness.

This entry was posted in Nature and Spirit and tagged yogananda. Bookmark the permalink.