Teaching Meditation in the Hospital

I taught the Ananda Meditation Class at Sutter Roseville Medical Center. It was presented in a package as a part of Integrative Care Program, which included:

The meditation classes were well received by all, and people wanted more. As I build my confidence in teaching meditation, I will offer more classes, about once a month for a year.

The basis for the teaching is “Caring Presence.” We need to teach the nurses to be nicer, more compassionate—and meditation will help them to achieve it.

I stated that I chose Ananda Meditation because it is an original technique that was passed down by the yogis without religious influences.

I did a lot of research of the Western approach to meditation, since there is a lot of interest in including meditation for healing purposes, without bringing in the religious aspect.

I also spoke of Dr. Richard Davidson from the University of Wisconsin, who has a website called Investigating Healthy Minds.

In 1996 the Dali Lama wrote Dr. Davidson a letter asking him to study the brain for kindness and compassion. He said that if we can study the brain to discover PTSD (post traumatic stress syndrome), bipolar disorder and other problems we must be able to see what happen with kindness and compassion. Dr. Davidson has dedicated his studies to brain and meditation and continues to share new findings to help humanity.

With the development of technology and computer imaging, and through functional MRI, we can see the activity of the brain and we now know that the left prefrontal cortex is activated during meditation. It is the center of kindness, compassion, inspiration and intuition. Once the prefrontal cortex is activated, it sends a message through the anterior cingulate to the limbic system, the center of emotion. It calms down the limbic system, which gives us the sense of calmness, peace and serenity that we can feel after meditation.

Basically, what the yogis understood a long time ago is now captured in MRI images that verify what we already know from experience.

Meditation is evidence based practice to calm the mind and activates the kindness/compassion center of the brain.

I also mentioned the comparative studies, which were done between 2010 to 2013, and how much technology has changed for the better.

Now, we can better capture images and focus on what actually happened with the brain chemistry during meditation. I am absolutely amazed at the rate of changes in technology and how much more we can comprehend the positive changes that happen because of the practice of meditation.

Pranayama is a great tool to switch from sympathetic nervous system (fight/flights/stress response) to the parasympathetic (rest/relax) by slowing down our breath. It reduces our cortisol level; a hormone that is elevated during stress response.

I stayed focused on the benefits of meditation for health, and being able to stay calm and present in any difficult situation.

The examples I used are situations that nurses face in the hospital, which my audiences are familiar with and can relate to.

As I continue to teach meditation in the hospital, I find that the combination of teaching measured breathing and the Ananda meditation technique are well received.

My goal is to help the nurses remain calm in the midst of their intense service. 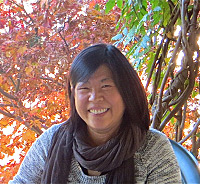 Christi Harsono. Christi Harsono is a graduate of Ananda Meditation teacher training in October 2013. She has been a nurse in a busy Emergency Trauma Center at Sutter Roseville Medical Center (near Sacramento, California) for over 20 years. She offers meditation classes to her fellow nurses.