Reflections and Lessons from Teaching Meditation

Posted on November 3, 2014 by Nayaswami Diksha

Upon returning from MTT in July, I began thinking about how I could introduce people to Hong-Sau by offering the four-week meditation class.  I felt confident about teaching meditation, so the obstacle was really about finding the right space to hold the class. 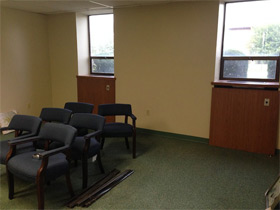 August: The room before makeover

I checked out some really nice facilities for rent, but the rental fees were too high for my budget.  Finally I decided to ask the owner of my office building about vacant spaces in the building.  He showed me a few, and I saw one I liked.  It was a big empty square room that was part of a vacant office suite.  It definitely needed some work, but I had a few ideas about how to do that. 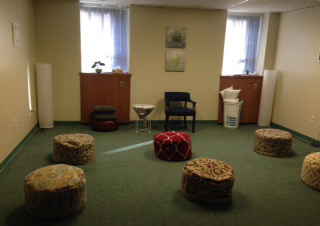 September: The room after the makeover

The owner was very helpful.  To my surprise, he offered to paint the room without charge and said I didn’t have to pay for the room and that we could discuss that later if all went well with the class. It felt to me: ‘too good to be true’.  After the room was painted and “made over,” I emailed him again to discuss the rental fee since the room would work out great.  He is well known for his generosity, but I didn’t want to take advantage of him, but I never heard back from him.  That was three months ago.

Since September, I have taught two four-weeks classes.  With the first four-week class, I was nervous the first evening of class.  To get through it, I kept reminding myself, “This isn’t about me.” It also helped when I focused on their learning rather than how I would appear or come off.  Although it’s important to have a clear, concise, and engaging presentation style, I didn’t want to over focus on that aspect, which only result in more nervousness.

The first group consisted of introverts and the second group consisted of more outgoing and talkative extroverts. I found it important to engage each group differently. With the more reserved class, I asked each person about their experience after an exercise.  When directly asked, they were happy to share their experience.  The more outgoing group would respond to general and more open questions aimed at the group as a whole. When a question was asked, someone would readily volunteer his or her feedback. Then the others would chime in to share their experience even raising their hand for their turn to speak next.   I must admit that the outgoing group took the pressure off of me.  However, at times it was important to rein them in, as discussions got off track at times. The more reserved group simply required me to be more in tune with each student to ensure they were grasping the concepts and techniques.

I definitely learned some lessons from the first group.  As I said, the first group was more reserved and they also had minimal experience with meditation. One person had an experience with a grandparent who meditated and another had practiced brief meditation during yoga classes.  Other than that, the group had no experience.  As a result, they were taking in a great deal of new information.

It was important not to provide too many details but instead to allow them to experience the concepts with brief guided exercises. Additionally, using the mantra Hong-Sau was a challenge for many of them.  I realized that this was one concept that did require a more detailed explanation.  I took it for granted that they would recognize the value of the mantra with a brief explanation, but it was so foreign to many of them that they resisted using it.  As the class progressed, I added the details and emphasized the importance of repeating the mantra, and they seemed to gradually incorporate it.

With the second group, I applied this learning and provided the details about the mantra.  It was clear that spending more time explaining the mantra was very helpful and there was less resistance to using it.  I made an MP3 15 minute guided Hong-Sau and send it to the students. This has greatly increased their practice!  I didn’t send it to the first group until the third class because I wanted them to try it on their own.  Even though written steps were provided, many of them stated they had trouble remembering the steps.  However, when I emailed the guided file to each of them, their practice increased greatly.  I sent the guided file at week 2 to the second group, and everyone in the class practiced Hong-Sau and many practiced it several times throughout the week.

Both groups enjoyed the material about the benefits of meditation supported by research.  They absorbed the information about the brain and limbic system easily.  For homework, I gave them an article to read about various research studies explaining how meditation benefits the brain.  Both groups discussed a tendency to overthink problems in their lives and to allow life’s stressors to bring their energy down.  They responded positively to the ways in which mediation, breathing, and posture can assist with lifting the energy in the spine.

Lighting!  This was important to both groups.  Both groups preferred dim lighting.  It became a joke with the first class because it was brighter than what they wanted at week one, so each week I brought in new bulbs for the lamps to achieve just the right lighting.  On the final class night, I got it right.  The key was a 25-watt bulb.  This of course was trial and error, and I’ve learned that asking questions and listening to the group is important.  The lighting seemed fine to me at the start, so I’m glad I asked.  Having a sense of humor about it helped a great deal.  To adjust for the trial and error process, I simply turned off a lamp or two until I achieved the right lighting at the final class.

Thinking back as I was preparing to announce the class, I really wasn’t sure who would sign up, so I just sent out some notifications about the class to those I thought might be interested, and within two days, the first class was full with seven students.  The second class was bigger than the first with nine students.  I wasn’t sure about having nine students in the room, but it was just fine.  Seven to nine students was just right for the size of the room and, as a new teacher, that number didn’t overwhelm me.  I also found that a small group of students allows for rich discussion.

Feedback from both classes was uplifting.  The students were generous with their positive comments. Specifically, they liked the flow of the class, which included brief lecture, discussion, and guided exercises.  They appreciated the homework and having a guided Hong-Sau file that I created to assist them with their practice in between classes.  The second group had a bonding experience with one another and discussed ways they could begin a meditation group of their own.  That alone was a positive proof that Hong-Sau works!

I am thrilled to have been able to share Hong-Sau with people in Ohio, where it is a foreign practice.  Special thanks go to Ananda and Diksha for providing such thorough training enabling me to share it with tools and techniques that were clearly engaging. 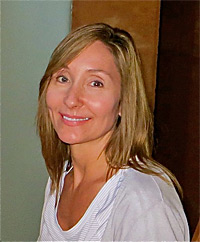