How Meditation Changes Your Brain

People often ask me, “So, what’s with this meditation thing? What does meditating do for you?” People who meditate regularly have experienced the positive effects that mediation can have. Most meditators report feeling an increase in positive emotion, less anxiety, greater mental clarity and focus, and a feeling of connectedness to the present moment. For thousands of years yoga masters, Buddhist monks, and other mystics have understood the profound ways in which meditation affects a person’s mental and emotional state. As both a meditation teacher and a psychology professor, I wondered what was going on inside a person’s brain which creates this experience. Neuroscientists have been asking this same question, and their studies have revealed a number of interesting neurological changes that occur with a long term meditation practice. 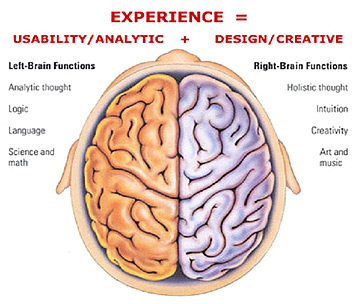 Before diving into the specific changes that have recently been discovered in the brains of meditators, it’s important to briefly review the structure of the human brain. The cerebral cortex is the part of the brain that controls the higher functions, such as language, vision, learning, memory, reasoning, tactile sensations, auditory processing, along with numerous other functions. This is the part of the brain that most of us picture when we think of a “brain”. The cerebral cortex consists of two halves, referred to as the right and left hemispheres. The left hemisphere is the rational and logical side of the brain. It is concerned with analyzing, planning, evaluating and judging the world around us. It processes information related to language, math, logical reasoning, and it connects the self to the past and the future. In contrast, the right hemisphere is the feeling side of the brain. The right hemisphere is generally more creative and intuitive. It processes information related to spatial abilities, visual imagery, and is concerned with your experience in the here and now. (Springer and Deutsch, 2001)

What does all this have to do with meditation? Some of the earliest scientific studies of meditation investigated patterns of brain activity in the right versus left hemisphere. These studies found a greater degree of activation in the right hemisphere for meditators versus non-meditators. (Pagano & Frumkin, 1977; Earle, 1981) This increased activity in the right hemisphere leads to more creative intuitive thought and less verbal/analytical thinking. In addition, the meditator may experience a greater feeling of “being” rather than “doing,” since the left hemisphere is primarily involved with planning and organizational activities. 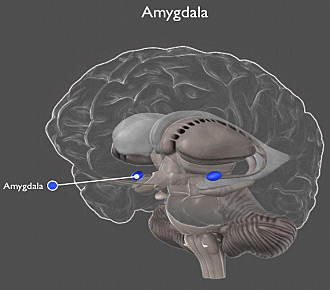 Another important structure that is influenced by a meditation practice is the amygdala. The amygdala is involved in processing negative emotions, detecting threat, and fear-learning. It links the areas of the cerebral cortex that process “higher” cognitive information with hypothalamic and brainstem systems that control “lower” metabolic responses (e.g. touch, pain sensitivity, and respiration). This allows the amygdala to coordinate physiological responses in the body based on cognitive information processed in the brain. In other words, the amygdala acts like a bridge between the brain and the body, especially in times of perceived stress. When the amygdala is activated it gears the body up for the fight-or-flight response. Researchers have found that long-term practitioners of mediation show less activity in the amygdala and therefore experience less physiological arousal related to stress. (Kabat-Zinn & Davidson, 2011) This reduced amygdalic activity does not occur only during a meditation session, but is a persistent pattern in people with a regular meditation practice. The way the brain responds to stress is changed by the meditation practice. A quieter amygdalai may mean the meditator has less frequent feelings of anxiety, less reactivity to external “stressful” events, more stable, positive moods, and a general feeling of calmness. 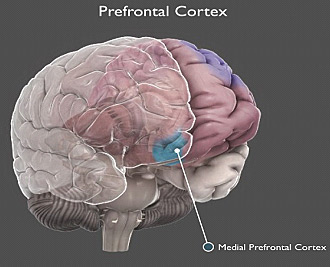 Long-term meditation practitioners experience an increase in activity in the region of the prefrontal cortex that is responsible for emotional regulation. This increased activity is what tells the amygdala to calm down. There are other interesting changes that have been found in the prefrontal cortex (PFC) of meditators. Neuroscience researchers have discovered an interesting pattern of activity in the medial prefrontal cortex in both the left and right hemispheres. This area in the left PFC is related to the ability to self-reference. It is the narrative area of the brain that connects our sense of “self” with the past and the future and narrates our experience. It is a thinking, planning, “doing” area of the brain. Long-term meditators experience a decrease in activity in this area. At the same time, they see an increase in the activation of the same structure in the right PFC. The right dorsal medial PFC is responsible for processing somatic experience in the present moment. Its primary focus is on “being” in the here and now. (Kabat-Zinn & Davidson, 2011)

Finally, researchers have noticed a change in brain wave patterns in meditators as compared with non-meditators. The diagram below shows the frequency of 5 different brain waves. Each frequency of wave is associated with a different type of brain function. Beta waves reflect typical, conscious thought and mental alertness. Alpha waves indicate a state of relaxation, while theta and delta waves are associated with sleep. Long-term meditators show high levels of gamma waves in the brain, especially in the prefrontal cortex. (Kabat-Zinn & Davidson, 2011) Gamma waves are high frequency brain waves that are associated with active thought, learning, memory, and intelligence. In meditators, these waves show increased levels and speed of synchronization across neurons, suggesting that the brain cells are working together more efficiently. This improved neural synchronization results in more effective transmission of information. The experience for the meditator is greater mental focus and clarity.

There are numerous ways that meditation can improve a person’s everyday experience of life. Neuroscience has just begun to show us some of the underlying changes that occur in the brain as a result of meditation. There is still much more yet to be discovered. Some interesting areas of future research include how meditation may change the expression of certain genetic traits, how it impacts the immune system, and the healing aspects of meditation. In the future, we may have an even more compelling answer to the question “What can meditation do for me?” but for now, you can cite the research outlined in this paper, or you could simply say, “Meditation can help your brain function better.”

This entry was posted in Meditation Teacher Training and tagged About Meditation. Bookmark the permalink. 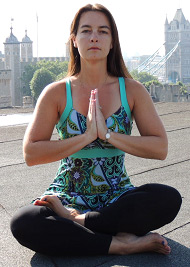 She is a psychology professor, Yoga Alliance RYT-200 yoga instructor, and Ananda Meditation Teacher Training graduate. Laurie has been practicing yoga and meditation since 2005 and teaches psychology, yoga, and mediation courses both at Anoka Ramsey Community College and as a private instructor. She uses her knowledge of psychology, yoga, and meditation to create an experience for her students that focuses on reducing stress and increasing happiness and calmness.

Laurie is a wife and mother of an energetic young boy. She finds that yoga and meditation are great tools for reducing the stresses of work and of parenting, as well as helping her find more peace and happiness in each moment.