I had the privilege to be asked to become Director of The Meditation Center in Dent, UK in February, 2012.  The Center is a beautiful converted chapel in the Yorkshire Dales. It is run as a charity and has been open for 15 years. Teachers at the Center have historically taught only one type of meditation.

Since attending the MTT Course at Ananda in October 2013, I decided to ask the Board of Trustees whether we could introduce the Hong-Sau Method to the Center.  Surprisingly – and happily – they were hugely supportive.

Not only that, but since we introduced the Ananda teachings into the Center, we also appear to have created a magnet for other fantastic teachers who want to teach various different types of meditation at the Center – Mindfulness/Reiki/Celtic. And we are attracting many more different and exciting people to our courses.

The feedback I am receiving from the courses has also been incredibly inspiring.  One lady in her sixties, undergoing cancer treatment, was completely overcome by her experience.  She was moved to tears, unable to converse for quite some time and said it had been one of the most beautiful and powerful experiences she had ever encountered.

And another man – again an experienced meditator – reported back that Hong-Sau was the first technique he had ever enjoyed enough to practice on a regular basis.  He is loving it!

I am hoping to be able to create our own Group Meditation sessions once a month at the Center, going forward, to bring everyone together who have learned the technique – and we will include chanting and affirmations. And I have been asked to start up a group in my hometown too… so it is an incredibly exciting time! 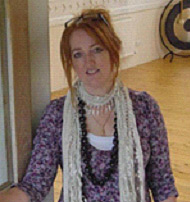 Annette Brooke. Annette Brooke is a graduate of Ananda Meditation teacher training in October 2013. She is a qualified journalist, lecturer and PR with three grown-up children and a dog, called Amber. She hails from the UK, is a member of the British Association of Vedic Astrologers and has published the first in her Flower Power book trilogy – The Orchid Hunter (One Man’s Search for Happiness)